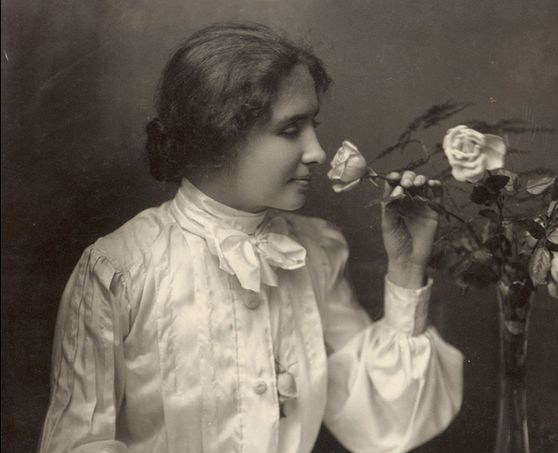 You know Helen Keller right? The deaf-blind girl who overcame early 20th century societal expectations to get a good education, and become a humanitarian. That’s the Helen we know, the ‘inspiration’; the stuff of milk, toast Saturday morning educational TV, with approx 2000 sappy Lifetime movies about her.

BUT if Helen Keller knew about the saccharine way she’s been remembered… well, I’d watch out.

See, Helen was actually one of history’s baddest bitches!

So, let’s take a step by step look at why everything you thought you know about Helen Keller was totally wrong!

1. Helen Keller was a radical

In 1916 an interviewer asked Helen Keller what she was committed to. Her response:

And Helen wasn’t playing! See her true life work was getting better rights for other disabled people, as well as women and workers.

In Helen’s mind, peace had had its chance, and it hadn’t worked. The only choice left for equality was revolution!

2. She dedicated her life to disability rights

Helen’s experience of being disabled was, to be blunt, incredibly rare. Getting an education and opportunities were not things anyone but 1% of the luckiest bastards had.

But Helen knew this, and she also knew that she couldn’t work to better the lives of everyone with a disability if she didn’t put the time in discovering how the other 99% lived.

Spoiler: Their lives were a shit show

You see, most people that were disabled were so thanks totally avoidable industrial accidents. Rich business owners refused to spend anything on workers safety, so horrifying accident levels just continued to rise.

And there were no lawsuits to fight this in the late 19th and early 20th century. So once left with a lifelong disability, workers were thrown on the scrap heap.

Oh, and America had no system in place to work out how many disabled Americans there were or how to help them.

Basically if you had a disability you were left alone and in poverty.

Helen was not here for this.

Helen figured two things:
– things couldn’t get better for disabled people until workers actually started getting treated like people
– Nobody wanted to treat workers like people

So, when she was in her late twenties, Helen joined The American Socialist Party.

She threw herself into socialism and within months she was BFFs with the movements leaders, and was travelling the country giving lectures on socialism.

If Helen couldn’t fix the system, she wanted to use socialism to smash it and start a new one!

Her intense stance and use of religion in her speeches soon lead to Joan of Arc comparisons; Helen bloody loved this, even saying:

‘ I too, hear the voices that say ‘come,’ and I will follow no matter what the cost, no matter what the trials I am placed under. Jail, poverty, calumny—they matter not. Truly He has said, ‘Woe unto you that permit the least of mine to suffer’

Not only was Helen going to smash disability barriers, she wanted to create an equal world for everyone.

She was an ardent suffragist, education advocate and the writer of satirical articles about misogyny (one was called ‘Put Your Husband in the Kitchen’) because our girl Helen was both fierce and witty as hell.

Helen was also part of the most controversial fight of her day:

Helen felt birth control would lead to women finally being in charge of their own destinies. So she went all in (as is the Keller style) throwing her support behind the likes of radical birth control leader, Margaret Sanger and making sure her voice was heard.

Now I think we can agree everything Helen has done thus far is brave and ballsy AF! BUT Helen’s radicalisim came at a huge cost:

5. Helen Keller was monitored by the FBI

The FBI saw Helen as a serious threat and they monitored her accordingly. Every time Helen’s name was mentioned in any kind of far leftist media, you best believe they had that shit on file.

Her speeches were scoured; everything from her childhood to her middle age. With the FBI looking for anything that could incriminating. Even a letter of condolence she sent was filed as evidence! (you can actually check out all the FBI’s findings on Helen here)

But It wasn’t just the FBI who were after Helen

6. Her books were burned

In 1933, Helen discovered that German students were planning to burn her books, thanks to their socialist content.

Never one to back down from a fight, Helen wrote to the students:

‘History has taught you nothing if you think you can kill ideas. Tyrants have tried to do that often before, and the ideas have risen up in their might and destroyed them.’

‘Do not imagine that your barbarities to the Jews are unknown here… Better were it for you to have a mill-stone hung around your neck and sink into the sea than to be hated and despised of all men.’

7. Finally-Helen didn’t want to be your inspiration

Helen knew that she would forever be seen as a sweet little disabled girl done good.

That when she raised money for the disabled it was met with a chorus of ‘awwws’ and applause. But the minute she stepped outside that box… yeah not so much (oh hi FBI!)

To that Helen had this (pretty sarky) response:

So long as I confine my activities to social service and the blind, they compliment me extravagantly, calling me ‘arch priestess of the sightless,’ ‘wonder woman,’ and a “modern miracle…but to advocate that all human beings should have leisure and comfort, the decencies and refinements of life, is a Utopian dream, and one who seriously contemplates its realization indeed must be deaf, dumb, and blind.”

So remember, next time you hear someone call Helen Keller an inspiration, she’s right up there in heaven, giving the middle finger.

This was interesting! Where can I find out more? Helen Keller wrote stacks of amazing essays about her beliefs, many of which are available for free online, so I definitely suggest searching them out!