Our murder obsession feels at its peak with podcasts like Serial now everywhere and documentaries on murderers and their victims littering our Netflix suggestions. But this is far from the first time that untimely and gruesome deaths fascinated people. We can date our love of murder back to…well literally always. It’s something that has just always fascinated people.

Nobody was no more obsessed than the Victorians. They truly loved the macabre, it’s in this era that we see the boom in séances and horror fiction, not to mention the very Victorian after dinner activity of busting opening a sarcophagus to see what was inside (japes) but there was nothing they loved more than a good murder.

True crime Penny Dreadful’s like Famous Crimes luridly detailed present and past crimes and even Punch got in on the action, eagerly sinking its teeth into grisly foul play and ensuring that the crime, trial and often inevitable execution became national gossip. 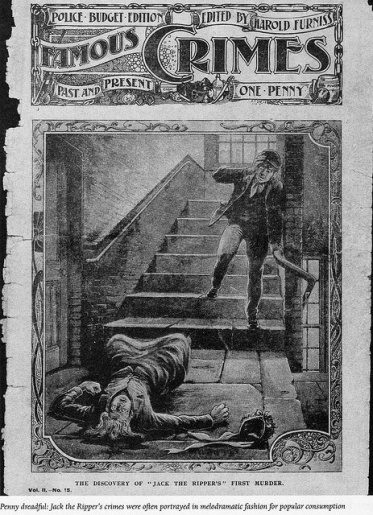 In 1847 Swiss ladies maid Maria de Roux met Frederick George Manning. Now Manning was not exactly a catch, he had recently been fired from his job as a train guard following suspicion of theft and wasn’t the brightest BUT Manning told Maria he was due to inherit a small fortune from his mother and so the two were wed.

Frederick George Manning tried his hand as a pub landlord and failed almost immediately. After selling the pub the couple moved to much smaller lodgings in Bermondsey. This is when Maria found out Fredrick George had lied and there was no fortune. Sadly couples therapy wasn’t an option at the time, nor were quickie divorces – so the Mannings hatched a deadly plot to both save their marriage and ease their money troubles.

Patrick O’Connor had once proposed to Maria and though he was well off she had opted to marry Frederick George Manning knowing he would one day inherit a fortune. Obviously this had turned out to be a lie and Maria now realised she had made the wrong choice…yet she thought that Patrick O’Connor could still be the solution to her financial woes. On the 8th August 1849 Maria invited O’Connor to dinner. Before his arrival she bought a large shovel.

When O’Connor arrived at the Mannings house, Maria sent him into the kitchen to wash his hands before eating. With his back turned to her, she shot him in the head. Frederick George Manning then came into the kitchen to find O’Connor half dead on the floor and he finished the job: “I never liked him, so I battered his head with a ripping chisel.”

Husband and Wife buried O’Connor and Maria went to the dead man’s house to start collecting his valuables.

Police soon began investigating O’Connor’s disappearance and their suspesions pointed to the Mannings. Realising they were cornered the couple planned to flee. Maria sent her husband to sell their furniture to raise funds for their life on the run. As soon as he had left the house she took everything of value and fled.

Frederick George returned to find his wife had double crossed him, but managed to escape just before the police reached the Manning residence where they quickly found O’Connors body covered in lime and buried under the kitchen floorboards. 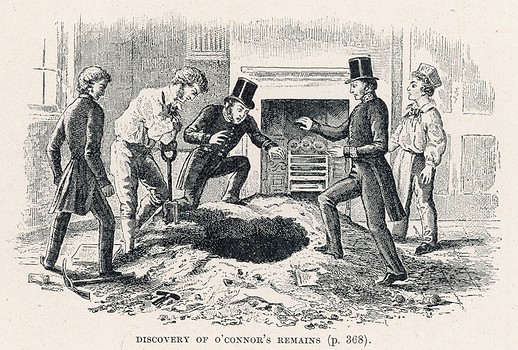 The couples trial was held at The Old Bailey in London on 25th Oct 1849 and it was a sensation. Maria was the subject of most of the attention, throughout the trial she was immaculately dressed, elegant and composed. However, this composure slipped once the jury read their verdict; guilty. Maria stood and screamed at the court: ‘You have treated me like a wild beast of the forest.’

Husband and Wife were both sentenced to be hung. This most rare of executions (a woman and the first married couple to be hung together in over a hundred years!) created further fever. A cottage industry was soon set up, with lodgings and horse and cart owners selling standing room tickets to the hanging and at least 2.6 million broadsides (Victorian one sheet newspapers) dedicated to the execution being sold. 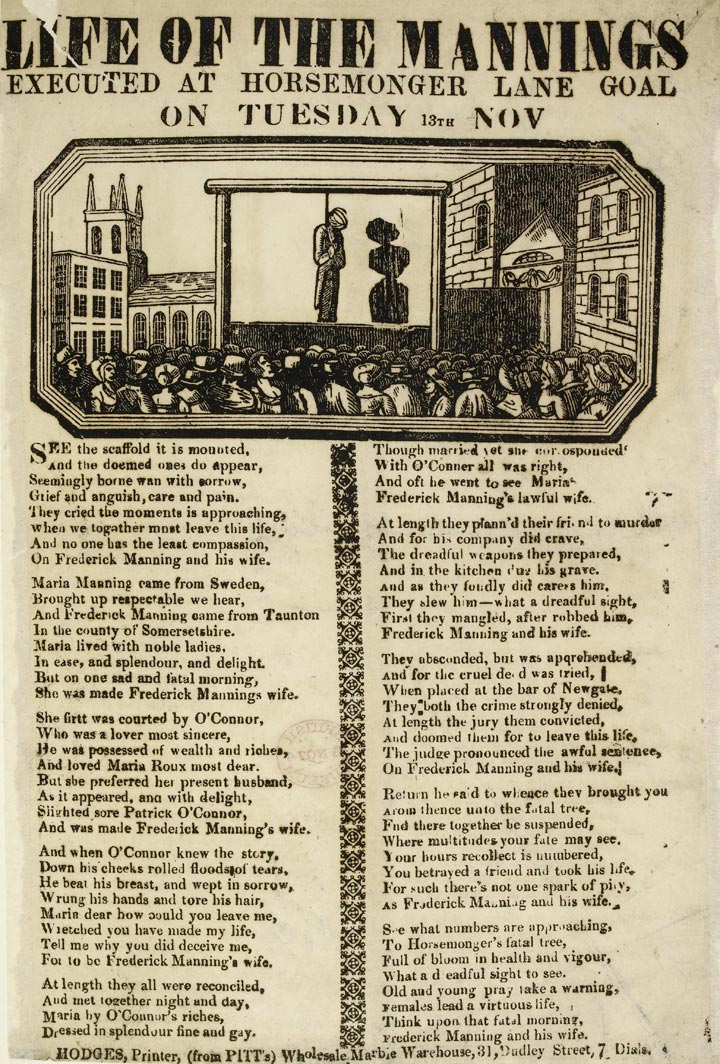 On the day of the Mannings execution a crowd of between 30,000 and 50,000 gathered to watch the pair be hung- the biggest crowd ever assembled at an execution in Britain. There was much gossip prior to the hanging as to whether the couple would reconcile on the scaffold and more importantly just what Maria Manning would wear to her execution (times really have not changed…). Fashion lovers were not disappointed and Maria ascended the scaffold “beautifully dressed, every part of her noble figure finely and fully expressed by close fitting black satin”. Maria and Frederick were then hung side by side. 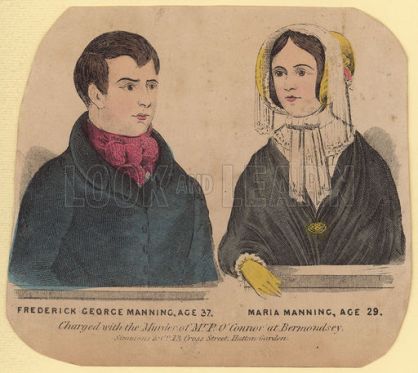 Yet they lived on. Those who had not been able to witness their execution were still able to see the Mannings in waxwork form, with Madame Tussaud’s promising a recreation of the Mannings kitchen (complete with O’Connor under the floorboards!) and a waxwork’s in Manchester advertising its Manning’s-a-likes as able to ‘amuse, delight and highly instruct’.

Maria Manning went on to inspire in the world of literature, most notably Charles Dickins, who having been at her execution became fascinated by the scandalous black satin clad woman and created a character in her likeness, Mademoiselle Hortense (both a lady’s maid and murderer) in his next book, Bleak House.

In at number 2 its child murder! (Don’t say I don’t do anything for you- also in advance, sorry this one is pretty bleak)

On the 24th August 1867 Fanny Adams , her younger sister Minnie and a friend left their house to go for a walk. The group were approached by a smartly dressed man in a black coat who offered Minnie and their friend money to leave and go get sweets, which they did. The man then offered Fanny a half-penny if she would accompany him to ‘The Hollow’, she refused and he picked her up and took her anyway.

Several hours later Minnie returned home without Fanny and told their mother about the meeting with the man in the black coat. Worried Mrs Adams, went to look for Fanny with the help of a neighbor, Mrs Gardiner.

Whilst searching they saw a man in a black coat walking back to the village from the direction of The Hollow. Mrs Gardiner accosted him and demanded to know what he had done with Fanny, the man shrugged off her claims “Nothing, I gave the girls money, but only to buy sweets which I often do to children.” The two women remained unconvinced, but then the man told them that he was the clerk to a local solicitor, William Clement, deciding him to be respectable the women let him walk away.

A search party was formed, and they quickly came across Fanny’s remains. Her head was found stuck up on two poles, the eyes missing. It would take several days to find the rest of the body which was dismembered and scattered nearby, her eyes were later found in a nearby river (I said this was bleak…).

That same night an investigation into the murder was launched and the obvious prime suspect Frederick Baker, Clerk to William Clement, was immediately arrested. Baker claimed his innocence, despite his clothes being bloodstained and being found carrying two bloody knives.

Evidence mounted. The entry in Baker’s dairy for the 24th August read: ‘killed a young girl. It was fine and hot’. Bakers colleagues said that he was missing between 1pm-3pm (the time of Fanny’s disappearance) and left the offices again at 5pm (when he met Mrs Adams and Mrs Gardiner) returning at 6pm when he then mentioned the meeting with the two women and commented that if Fanny’s body were to be found it would be ‘awkward for him’ (truly a master criminal) 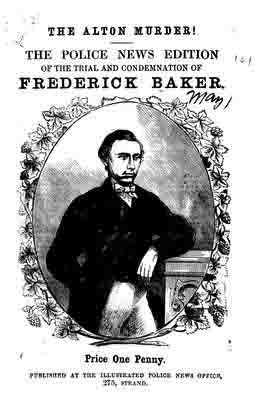 The police feared that the local community would attempt to lynch Baker and his initial hearing and trial were carried out at top speed, with his trial starting at Alton Town Hall on Thursday 29th August, just days after the murder.

The judge urged the jury to take into account Baker’s poor mental health and consider Baker irresponsible for his action through reason of insanity- but the jury took just 15 minutes to convict him, Guilty. The judge had no choice but to carry out a sentence of death. 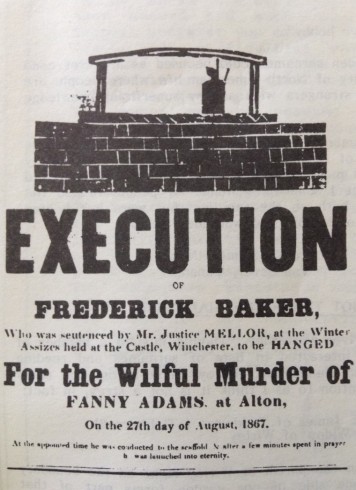 Prior to his execution on Christmas Eve 1867, Baker wrote to the parents of Fanny Adams and asked for their forgiveness of his crimes that he had committed at: “an unguarded hour and not with malice or a forethought”

The murder of Fanny Adams resonated throughout the country, with the grotesque illustration and write ups of the murder featured across newspaper and broadsides. The murder would also become the subject of many a folk songs and ballad.

Then in 1869 the British Navy introduced a new ration, mutton in a tin. The food stuff was hardly appetizing and sailors started a running joke that the mutton was actually the remains of ‘sweet Fanny Adams’ (truly the height of humor…). These joke continued and soon the contents of the tin became to be known as ‘sweet FA’ this trickled into popular parlance and still today people say ‘sweet FA’ as another term for ‘nothing’. Nice.

I’m sorry, but I did say this one was bleak!