We’re going to  show you why Christmas is one of the creepiest times of the year (with the weirdest Christmas lore from across the globe.

The Krampus gets more recognisable every year, his PR team are working magic.

This demonic fucker-up of tiny children is a Germanic folklore (i.e the most fucked up folklore-IT’S FANTASTIC) Krampy is also one of the oldest on the list!

Shitting kids up since ancient times! Via Giphy

So the legend goes that old Kramps kidnaps and then gorily devours children who’ve been naughty that year.

Festive images of The Krampus ripping up kids have been around for hundreds of years. What a lovely tradition.

Krampus himself looks like the lovechild of Satan and a demonic billy goat.

Think gnarled horns, hooves and a face only a mother could live… If the mother was blind, deaf and had no sense of smell.

So very festive! Makes me feel all warm inside.

In Schlanders (a Germanic city in Italy) it’s still tradition for grown ups to dress as Krampus on Christmas Eve and run around scaring the shit out of children… sign me up please!

After scarring children for life they enjoy a lovely glass of Schnapps by the fire.

The first of some terrifying Icelandic legends, this evil mountain witch has a similar M.O as most Christmas creepies, in that she likes to punish naughty children.

She is an Icelandic giantess with hooves, a wrinkled face and 13 tails.

She comes down from the mountains on Christmas eve and kidnaps all the naughty children, taking them back to her home in a giant sack.

Then boils them alive in a stew, which sustains her till the next year.

Tasty AND efficient, this babe does not fuck around!

She also has an equally horrendous extended family!

You’ll meet her sons later in this list, but Grýla also had three husbands… who she murdered because they were shites and they bored her.

This is the biggest dick cat of all: A CAPITALIST LOVING MOGGY NIGHTMARE.

Now most of us can’t say Jólakötturinn so we just call this bastard ,the Yule Cat, which feels very misleading since their entire thing is slaughtering poor folk. 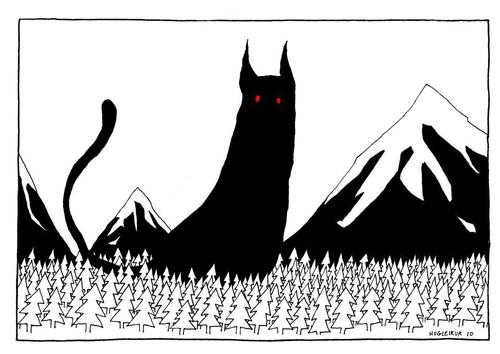 Lemmie explain: Christmas is a time to celebrate by buying fancy new duds, splurging on a spiffy hat or a shiny new pair of shoes…and if you don’t, this cat will use its particular set of skills to hunt you down and kill you along with your entire family.

SO FUCKING FEEL GOOD! Via Giphy

Basically this Icelandic folklore was meant to inspire poorer people to work harder during the winter months so they could afford new garments for their family. CAPITALISM FOLKS!

LADS LADS LADS! These guys are the pinnacle of unwanted Christmas guests.

If you thought creepy Uncle Alan was bad then wait till you meet these guys.

These are the spawn of Gryla, y’know the mountain witch!

Them’s some fucking jazzy names! Get the reference… via Giphy

Firstly they don’t all arrive together, they arrive one day at a time, and you’re stuck with them for 13 days.

They leave some nice prezzies for the kiddlywinks who have been good.

But the bad kids get all their shit fucked up.

Though they don’t murder you, like their dear old Mum does. They kick stuff over and pinch food, just more general oikness

This lovely little Goblin bum nugget comes from Southern European Folklore, jumping out of hiding during the twelve days of Christmas to be a total pain in the arse.

Descriptions of them vary from country to country, but everyone agrees they are ugly as hell and causers of lots of mischief.

What a handsome chap! Via Wikipedia

To keep them away during the 12 days people would light a fire to ward them off or leave a colander outside.

The colander is out there because the Kallikantzaros can’t resist counting stuff apparently… also if they say the number 3 out loud THEY WILL BLOW UP because it’s a holy number.