Who doesn’t love a wedding? Trick question! Everyone does. There’s cake, booze and tons of stuff to secretly judge (we all do, its fine!)…sadly though there are also dull great aunts, too long speeches and the fact that wearing heels for more than 3 hours is basically torture.

And THAT my friends is why a Royal Wedding, is the best kind of wedding.

You can not so secretly judge away at every little detail, free from guilt and without any form of shoe based pain! THE DREAM.

So in that judgemental spirit, we’ll be pitting iconic royal wedding dresses against each other to discover which royal bride had the best (and worst) dress in history!

I’ll also be taking away 5 points if the dress is so expensive that you need to sell your organs/first born to afford it.

At the end we’ll see which historic wedding dress wins!

Right then! Lets get started!!!!

For much of history, wedding dresses were only a thing for the rich. They were a chance to show of wealth and status; because, well..marriage was an exchange of goods between families and the dress was just a chance to show off how awesome those goods were (sad but true!)

So where as poorer brides would wear their nicest dress, rich brides would deck themselves in jewels, embroidery, beading and sumptuous fabrics in all colours of the rainbow.

That’s right, colours! Vivid reds and blues, yellows, even golds. This dress would serve as a girls best dress for a while, so why waste it on a colour that gets dirty crazy easily and is hard to wear again?

In 1558 Mary Queen of Scots married Francis, Dauphin of France, in a no expenses spared ceremony in Paris.

The coming together of two countries was an auspicious occasion that demanded the best in lavish excess and Mary more than held up her end of things with her dress.

The train of Mary’s dress was over 10 ft long and so stuffed with jewels that it required two ladies maids to hold it aloft at all times!

Mary carried the theme of all the jewels into her accessories, rocking a golden cornet and necklace, both absolutely stuffed with gems.

Yet despite all its rocks Mary’s dress caused quite the scandal; you see Mary…..

Now, in the 16th century white was a colour of mourning, not really the vibe you want for a wedding.

BUT white was Mary’s favourite colour! She thought it made her look amazing and emphasised her porcelain skin and auburn hair; so haters be damned, she was wearing god damn white if she wanted to.

Sadly it didn’t prove to be a great sartorial choice.

Two years after the wedding, Mary’s groom died, which caused the French court to claim that Mary’s white dress was to blame, as her poor fashion choices must have cursed their wedding and killed her hubby!

Functionality: 3/10 (you need 2 ladies to carry the dress at all times, it doesn’t say much for how likely you are to be able to pee…)

Ability to look back without thinking you looked an absolute twat: 0/10 (sorry, but if people think your dress killed your husband, its not great is it now?)

And I’ll be taking away 5 points for cost, as even for a Royal all those gems are leaving you out of pocket!

Princess Charlotte of Wales was a hugely popular royal; heir to the throne and  a bit of a fashionista – it shouldn’t come as a surprise that her 1816 wedding to Prince Leopold (later King of Belgium) was a big fucking deal!

On the morning of the wedding people lined the streets hoping to catch a glimpse of Charlotte. And when she finally emerged, she caused an immediate stir.

Charlottes dress was made of a woven silver thread with intricate embroidered flowers on the hem.

Under the dress was a tissue slip made of the same silver thread and on top was a sheer silk netting. Charlotte’s mantua was an estimated 7.4 feet and she was also dripping in diamonds.  It’s even said that Charlotte had diamonds in her hair.

I repeat. Diamonds. In. Her. Hair.

Functionality: 5/10 (The fact that she didn’t need help to move is a plus, but that 7 foot mantua must have made going through doors a bloody nightmare!)

Ability to look back without thinking you looked an absolute twat: 7/10

I’ll be taking away 5 points for cost, as a wedding dress shouldn’t cost the same as a Donald Trump golfing holiday.

Victoria wanted a lot from her dress. You see, big priority for her was making sure that her dress reflected British industries, which would grow British trade (admittedly a bit of a big ask for a dress!)

More than that though, Victoria wanted her dress to make it clear her new husband was not becoming her subject. See, Victoria was really traditional and in marrying Albert she wanted to become his wife, not his Queen.

So Vic dumped the red ceremonial robes and instead plumped for something demure, simple and British made. 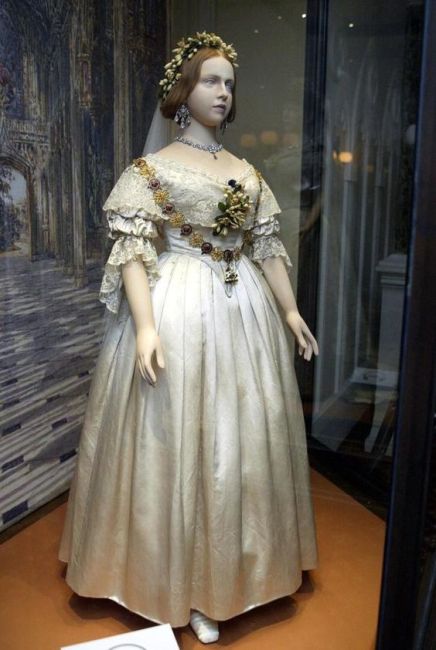 Keen to promote the hand made British lace industry (which was taking a bit of a battering thanks to the industrial revolution!) Vic decided to cover her dress in delicate lace.

And to make the lace really stand out, Vic went rogue.

She wore an all white dress.

Victoria was actually the first British royal to ever wear an all white dress. And it wasn’t to symbolise purity (she wore Orange Blossom to symbolise that!) the white, was just to pimp out British lace.

BUT the trend stuck. Soon brides all over the country were copying the Queen and wearing a white dress for their weddings.

Ability to look back without thinking you looked an absolute twat: 10/10 (when you start a 100+ year old wedding trend, you kinda nailed kt…)

As Victoria’s dress was used to promote British industry, I’ll be taking away no points!

When Wallis Simpson was picking out her wedding dress for her 1937 marriage to The Duke of Windsor (formally King Edward Vlll) she was walking a very precarious tightrope of public opinion.

Everyone was still pretty pissed off that the King had abdicated to be with her, plus Wallis was a two time divorcee, which people weren’t fans of.

Both gossip magazines and the public thought it would be deeply inappropriate for her to wear white, as she’d been married before! Colour wasn’t the only issue facing Wallis.

Luckily Wallis wasn’t the fro fro princess type. After all this was the lady who famously said:

‘you can never be too rich or too thin’ 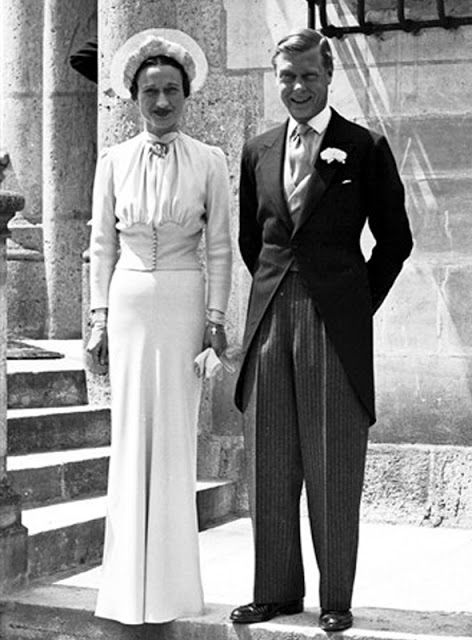 She followed royal protocol, covering her cleavage and arms, but bar that it was nipped in, slinky and all in all, a big two fingers up to the monarchy.

Instead of a veil Wallis wore a hat with a tulle ‘halo’.

Sources from the time suggested the ‘halo’ was to help people warm to her and see her in a less demonised way; wearing a literal halo seems a bit on the nose, but it’s your wedding day, you do you boo.

Ability to look back without thinking you looked an absolute twat: 7/10

Truly the Kardashians of wedding dresses. You can’t get away from it. It’s everywhere. It’s even got it’s own Wikipedia page!!!!

Designed by David and Elizabeth Emanuel, Diana’s dress was huge. Both in scale of the global media attention it received (and continues to get!) and in the form of the actual dress.

The train came in at 25 feet. It had thousands of pearls and and sequins sewn throughout its many many layers. Estimates for the dress cost vary, but the latest one (from the designer) is just under £4,500 (at the current exchange rate) which seems a bit of a steal!

Within hours of Diana appearing in the dress, brides were calling up for copies and soon a decade long love of meringue dresses was born.

Ability to look back without thinking you looked an absolute twat: 3/10 (I’m sorry!)

So the results are in!

I can reveal that official (ish) best wedding dress in history is:

Queen Victoria’s wedding dress from her 1840 wedding to Prince Albert!

What do you think? Is this the right pick?

Which dress would you wear? Let me know!