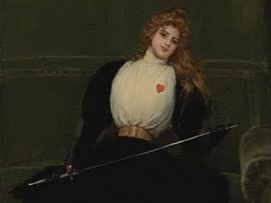 Julie D’Aubigny was born in 1673 to a family who was in the service of King Louis XIV of France. Her Dad had a position training Pages so Julie got quite the education learning to read, write, draw and fence.

Don’t piss off a gal with a sword! Via Giphy

She was married off to some bloke with a bit of cash with the du Maupin surname, which she picked up and used throughout the rest of her life. She left the boring husband in Paris and didn’t really do much with him.

Next Julie fell in love with a master swordsman names Sérannes and he taught her a few tricks with a blade. Eventually the lovers had to do a runner, because Sérannes murdered some dude in a duel over insults thrown.

They made money by performing duels or singing 17th century show tunes for the punters, Julie worse mens clothing during their numbers. One night a dude in the audience shouted that he didn’t believe Julie was a woman, she responded by taking her top off… He then shut up.

Julie lost interest in her fencing bloke and at this point she meets a beautiful young lady. She sweeps this chick right off her feet and the two had a whirlwind affair before the parents got in the way and sent Julie’s bird off to a nunnery in Avignon. Did this deter Jules? HELL NO!

She snuck into the convent passing herself off as a trainee nun, then she located her lover and hatched a plot to see them both on the run. She took the body of a recently deceased nun, put it in her lover’s room and set fire to it.

Their affair fizzled out after a few months and she went back to her family. Julie then went round France singing and showing off her sword skills, still while dressed as a dashing gentleman. This got her into some trouble when she stabbed the son of the Duke of Luynes through the shoulder.

Julie turned that round by going to apologise to him and then shagging his brains out.

Julie then decided next she was going to conquer the Paris opera! She got herself pardoned by the King for the whole ‘burning a dead nun’ thing and was then hired by the Opera in 1690. Maupin was very popular because of her beautiful voice and androgynous appearance, the ladies and dudes loved her!

Get it grrrl! Via Giphy

Did this calm things down for Julie? I think not! She was at a fancy costume party in 1695 and she kissed a sexy blonde lady while dressed as a dude, she was challenged to 3 duels by various poncey noblemen. She whooped all their asses and then had to leave Paris for a bit until the heat died down.

She eventually returned to the opera and fell in love with the Madame la Marquise de Florensac (that’s a bloody mouthful) who was said to be the most beautiful woman in Paris! GET IN JULES!

The affair continued until de Florensac died from a fever. Julie was distraught and retired from the opera in 1705 and retreated to a convent where she died two years later at the young age of 33.

Julie was the epitome of live fast, die young and leave a good looking corpse. Someone needs to make her life story into a film like NOW please.

That was interesting, where can I learn more?

Kelly Gardiner’s book Goddess is a brill place to start, she’s done a shit load of research and it’s a really juicy read.