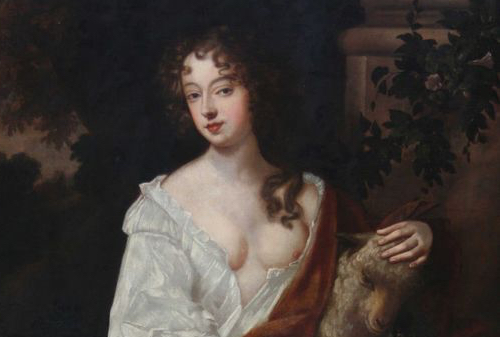 Nells mother ran a brothel; her Dad wasn’t on the scene. But this wasn’t even the most tulmotous part of her, far from ideal, childhood.

Born in 1650, Nell grew up in one of the most difficult times in English history.

By 11 Nell had seen England change from a puritanical Government led country, where church attendance was mandatory and gambling, dancing and theatre was banned – to a country with a new King, Charles ll, at its helm, who loved nothing more than a drink, a dance and a roll of the dice.

It was to say the least: a full on clusterfuck of change!

BUT she didn’t have time to focus on how the rich (and therefore powerful) were turning her world on its head; she had to earn a living!

Growing up in a brothel it’s very possible that Nell worked as a child, she worked as a sex worker, though it’s not known for sure if she did.

What we do know is that one of Nells jobs was to fetch brandy to refresh worn out punters mid session. A totally acceptable job for a child.

But, growing up in the brothel had made Nell a hustler and by her early teens she was flogging oranges to the crowds now flocking to Londons Covent Garden and its newly re-opened theatre district.

Orange selling may sound wholesome, but believe me, it was dog eat dog.

With hoards of sellers packing the streets, only the loudest, boldest and most whip smart would get theirs wares noticed. In this competitive game of survival, Nell was a clear winner.

With a quick wit, a no nonsense attitude and looks to boot she quickly captured the attention of the crowd and her oranges were selling like hot cakes (or hot oranges?…)

But it wasn’t just Theatre go-ers who were attracted to Nell. The Kings own theatre company soon noticed Nell and invited her to join their troupe.

At just 14 Nell became one of the first female actresses to take the stage.

Sadly, Nell couldn’t read or write, which made reading scripts and learning lines pretty much impossible!

Still, she found ways round this. Having herself coached through the dialogue.

But this impairment perhaps explains why Nell hated dramas, which she found dull and too wordy (to be fair, if you had to sit through restoration era drama I’m sure you’d agree)

Yet, when it came to comedy, Nell would light up a stage. Using her fast wit and ability to creatively swear like a sailor, Nell became a household name.

His thirst simoly could not be contained and Pepys continued;

‘So great a performance of a comical part, I believe, was never in the world before’

As all good theatre kids know, a play isn’t anything if there isn’t a showmance behind the scenes and Nell was more than happy to do her bit. So, she started an affair with famed actor, Charles Hart.

Like all good showmances the pair starred opposite each other in several productions and their PDA made things nice and awkward for everyone working with them.

But it wasn’t too last. Nell moved onwards and upwards; starting affairs with people whose names started with ‘Sir’ and ‘Lord’.

And then one night Nells life changed for ever…

In 1667 a 17 yr old Nell was performing in ‘The Maiden Queen’, when the thirty something King Charles ll rocked up.

Charles was taken with Nell, as was his pal, the Duke of Buckingham, who saw Nell as the perfect pawn for a scheme he was plotting.

You see, The Duke of Buckingham was keen to oust the Kings current mistress, Barbara Castlemaine, who he believed was demanding too much money and power.

So why not replace the noble born Barbara with this gutter snipe? Nell was a slum girl done good, surely she’d be so thrilled at being in the Kings bed she would be no trouble at all!

Nell immediately refused the Mistressing offer. Unless, of course, she was paid £500 compensation for the ‘trouble’ that becoming the Kings mistress would cause her.

The King wouldn’t pay Nell… but he also couldn’t resist her.

She soon became became a fixture at court parties, events and plays. Within months the unlikely pair were firm friends and only then did Nell fall into Charles bed and accept the role of royal mistress.

Of course she still had caveats! She wasn’t giving up her career for anyone.

Charles eventually agreed and so Nell became one of the first Royal Mistresses to hold down a career and her mistress-ing duties.

Charles was enamored with Nell. So enamored he had a topless portrait of Nell made and took immense pleasure in taking male friends into his rooms to let them marvel at the fine piece he was tapping. Because Charles was nothing if not a classy King.

Nell was the apple of Charles eye…but that eye had a habit of wandering.

In 1668 Charles made entertainer, Moll Davis his mistress.

He lavished Moll with jewels and the promise of a house. The similarities between the two women were obvious and this cut a little to close to the bone for Nell. So she decided to shut that shit down.

Nell sent a dish of sweet meats for Moll to fill up on before she joined the King in bed that night (gotta keep your energy up!).

Shortly after she was removed from mistress-ing duties.

After Moll, no other mistress came close to toppling Nell. By 1670 she was firmly the main woman in Charles life and was pregnant with his child.

She decided to rest up and make sure her unborn baby was safe, so stopped working as an actress.

Unfortunately, at the same time, Charles decided she should also stop working as his mistress.

There was a new lady in Charles life and this one was no less than French nobility!

Louise de Kéroulle moved to England to serve the Queen (she had previously served Charles sister in France) Charles was soon head over heels for his wifes new maid and made her a royal mistress.

Louise used this new position to enjoy the finer things in life. She spent wads of cash on art, fashion and jewels. On the side she took up politics, forging herself a key role in English affairs with which to promote French causes.

Unsurprisingly Nell and Louise did not get along.

Not only were they fighting over the same man, but they were from two very different worlds. Louise was born into her position, Nell had to fight tooth and nail. Louise had never needed to work a day in her life, while Nell loved the independence work gave her so much that she was back on stage a mere four months after giving birth!

The fight between Louise and Nell got dirty real quick. And by that I mean they used tactics that were less based in Royal proticall and more Mean Girls.

Nell dubbed Louise ‘squintabella’ (due to a slight cast on Louise’s eye) and Louise never missed a chance to bitch out Nells lowly birth.

Charles gave Louise the title, Duchess of Portsmouth, as thanks for role as mistress. Obviously Louise looooved rubbing this in Nell’s face. Once confronting/faux complimenting Nell in a crowded room (As she was passive aggressively want to do)

‘Nelly, you are grown rich, I believe, by your dress; why woman you are fine enough to be a queen’

‘You are entirely right, madam, and I am whore enough to be a duchess.’

Bitchy comments aside, Nell had one thing Louise could never have.

She had the people on her side.

English people had a history of not being huge fans of the French and they were certainly not fans of Louise.

She was catholic in a protestant country, who was rumored to be a spy and oh yeah…she was French. Nell played up to this.

One day when riding through London, the people in the street stopped to boo the carriage, thinking the woman inside to be Louise.

Calmly Nell popped her head out of the window and said:

“Pray good people be civil, I am the Protestant whore”

In addition to her ability to sass for days, a HUGE positive Nell had going for her in the growing battle against Louise, was that she didn’t engage in politics.

This was a shrewd move. Nell had seen countless mistresses removed from their posts due to political meddling. Hell, she had even bought in as a mistress to oust the political minded Barbara Castlemaine!

The more Louise pushed for Frances interests in English politics, the more she pissed people off and pushed Charles away.

Nell opted for a different tact. She wanted to show Charles she was in it for the long haul. That the only thing she wanted from this relationship was him.

She didn’t ask for titles unless it was for their children and only pushed for political and social change on very rare occasions; which had the added bonus that this meant she was more likely to be listened to.

Nell’s clever moves paid off in 1675 when an exotic new woman arrived at court and pushed Louise off her pedestal.

But Nell wouldn’t be ousted so easily. By now she had stopped acting and given Charles 2 sons, she’d paid her dues and wasn’t leaving without a fight!

Luckily Nell didn’t need to fight, Hortense (who we’ve covered here) was far to busy getting drunk, dueling in her nightgown and having sex with Charles’ daughter, to have any time to actually spend with Charles.

Though Hortense was out the picture things were about to get veeeeery shit for Nell.

Nell had just turned 30 and it felt like her life was already over.

She didn’t know what to do. All she wanted to do was escape.

Nell packed up her things and moved to the country.

But Nell wasn’t going to be shacked up in the countryside alone.

He wanted to relax; less partying all night, more of having a little lie down. Where better to do that then Nell’s country escape.

With nearly twenty years under their belt, Nell and Charles were happy to just spend time together. They went on walks, played cards and spent time with their son. Basically, they just had a nice time.

Then, on the 1st February 1685, Charles spent the evening with Nell and some of his past mistresses (which sounds a bit Sister Wives…but each to their own)

The next morning Charles suffered a fit and 4 days later he was dead.

His last wish was:

As per Charles wishes, Nell’s debts were wiped and she was given a hefty pension. Despite being an very eligible bachelorette, Nell turned down all suitors, instead choosing to spend her time hosting salons at her house and entertaining friends.

Then in March 1687 Nell suffered a stroke that left her half paralysed.

In May that same year she suffered another stroke that confined her to bed. She continued cracking jokes and seeing friends until in November 1687 she suffered a final stroke. Nell died aged just 37.

But she wasn’t done just yet…

A huge crowd swarmed London’s Martins in the fields church for Nell’s funeral. As per one of her final wishes, the closing sermon read:

‘Just so, I tell you, there will be more joy in heaven over one sinner who repents than over 99 righteous persons who need no repentance’

This was really interesting where can I find out more? In the spirit of Nell I am going to direct you to a play. That play is of course called, Nell Gwynn. Much like Nell its a whole lot of fun and is currently on at the Globe in London and also on tour!