This is the excerpt for your very first post.

Hangovers are as old as history itself. As soon as people worked out how to create and drink alcohol (at least 10,000 years ago, somewhere in the Neolithic period) they were also working out how to cope with the morning after.

From Ancient Egypt and Greece, to the Middle Ages, and even the courts of Kings and Queens, every era has its own hair of the dog, and all of them are infinitely more interesting than the Iron Bru and bacon sandwich that your mate swears by.

Starting strong- our first hangover cure comes from my favourite lover of drunken debauchery, King Charles ll; and it’s a doozy.It isn’t exactly surprising that Charles needed a solid hangover cure (this is the man that drunkenly yelled ‘encouragement’ at the foot of his little brother, James l, bed, whilst the aforementioned was losing his virginity) but the method that Charles used to help abate his headache and woozy stomach was a little, er, un-orthodox.

Respected 17th Century physician, Dr Jonathan Goddard suggested ‘Goddard Drops’ for the King, which was an elixir consisting of dried viper, ammonia, and the skull of a recently hanged person. Dr Goddard sounds like a delight.

We don’t know how effective Charles found Goddard Drops, I’m going to suggest it probably wasn’t that good- though the ammonia may have helped him to throw up. So if that’s your thing…

The good people of The Middle Ages were partial to a drink. This was in no small part due to the water being so unclean that it was a much safer option to drink alcohol instead.

Brewing beer had long been popular, but it becomes almost an art form during this period, it’s like craft brewing now, but with less irony. Soldiers returning from the Crusades bought back new knowledge of spices, herbs and mass murder- two of which really helped in creating a new beer boom. 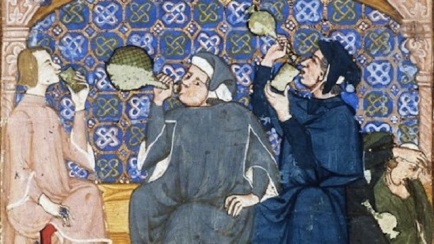 So what did these new beer aficionados’ do to beat the morning after the night before? They ate eels. Now this actually sort of makes sense, eels are jam packed full of good stuff, including protein, calcium, and tons of vitamins!

Unfortunately, that wasn’t why they were eaten. Doctors (a term I loosely use…) of the period believed that once consumed, the eels would become alive when in the stomach, and drink up all the alcohol left inside- a really nice visual image there

‘Mother’s Ruin’(Gin) had started to wain in popularity in Victorian England; as the temperance movement promoted controlled drinking – but you can’t keep a good binge drinker down, and the cocktail soon arrived on British soil which Charles Dickins gleefully wrote about in his American Notes for General Circulation. To combat a night of too many Gin-Slings and Timber Doodles (actual Victorian cocktail) people would warm up some milk and then mix in a spoonful of soot; this would be consumed to help with any shakiness and sickness. Though not recommended by me (or anyone) – the charcoal present in soot does actually help to balance acid and alkaline in the stomach, so it might have helped.

It also seems like a much nicer option than another Victorian hangover remedy suggested in The Medical Advisor, which involves pouring vinegar down a person’s throat, and then rubbing it into their temples, which seems less like a hangover remedy and more a really dicky form of water torture.

The Romans have a reputation for being big drinkers, but for much of the period, that really wasn’t the case. Wine tended to be diluted with water, 1 part wine, 4 parts water, and alcohol was only really consumed during meals. However, feasting could sometimes go on and on, and on and on, and…on; a lot of over indulging on wine and food inevitably leads to a very nasty hangover (think post Christmas…)

I spoke to soon. Pliny The Elder wasn’t done. Along with being an esteemed Roman author, naturalist, philosopher and Army commander, Pliny knew that his true calling was developing hangover cures, and that’s how he came up with possibly the greatest idea of his life, defeating a hangover by eating a fried canary.

Pliny was pretty exact on what you needed to do to an unfortunate canary to truly get it’s full benefits and flavour. First one must behead the bird, before fully de-feathering it, then fry it, and add salt to taste before serving.

There aren’t really any benefits to this, its basically a really grim fry up, but it would make a good talking point- should you want to traumatise someone by kidnapping, beheading and then eating their pet. I know what Pliny would do.

Until 1906 Coca Cola contained a pretty hefty dose of cocaine, which made it a very popular hangover cure, because well, that’s going to perk you right up. The cocaine came from coca leaf, which was also prominent in several other products, including Halls Coca Wine, which was was marketed as a ‘great restorative’ (Halls wine is now banned and non-existent, because you know, cocaine…)

Once cocaine became the sort of thing you weren’t allowed to put into your ‘restorative’ products, something else needed to be done to sell them as hangover friendly. Adolphe Jeantet, The Ritz Carlton’s Head Banquet Man (actual job title), had just the thing, and in 1938 his hangover cure took New York City by storm, a chilled bottle of Coca Cola, shaken, and then mixed into a glass of ice cold milk. Delicious? Jeantet’s press agent at the time described the effects of the drink; you drink it ‘take a little nap, and after that you feel wonderful’ –that actually sounds really nice.

Now chances are, depending on the severity of the hangover, you already want to do this, so just let it all out. Kingsley Amis (great name), author of On Drink, suggests that crying is the best hangover cure. Now this particular tip isn’t incredibly historical, On Drink was written in 1972, but I do think it is pretty brilliant.

Kingsley argues that to tackle the physical hangover symptoms, one needs to tackle the emotional symptoms (can you tell this book was written in the 70’s?), he calls this ‘The Metaphysical Hangover’ (yup definitely written in the 1970’s), and the only way to defeat it is by embracing all your feelings, and just having a good cry.

So thats the best that history has to offer your hangover- I hope that it helps, but if not: